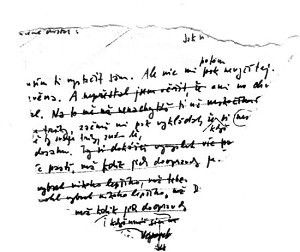 My literary extensions into other arts are undertaken in order to increase the degree of unpredictability. They function as “a multiplication of the labyrinth” into other dimensions. The primary labyrinth, for me, is always the written text, the manuscript. 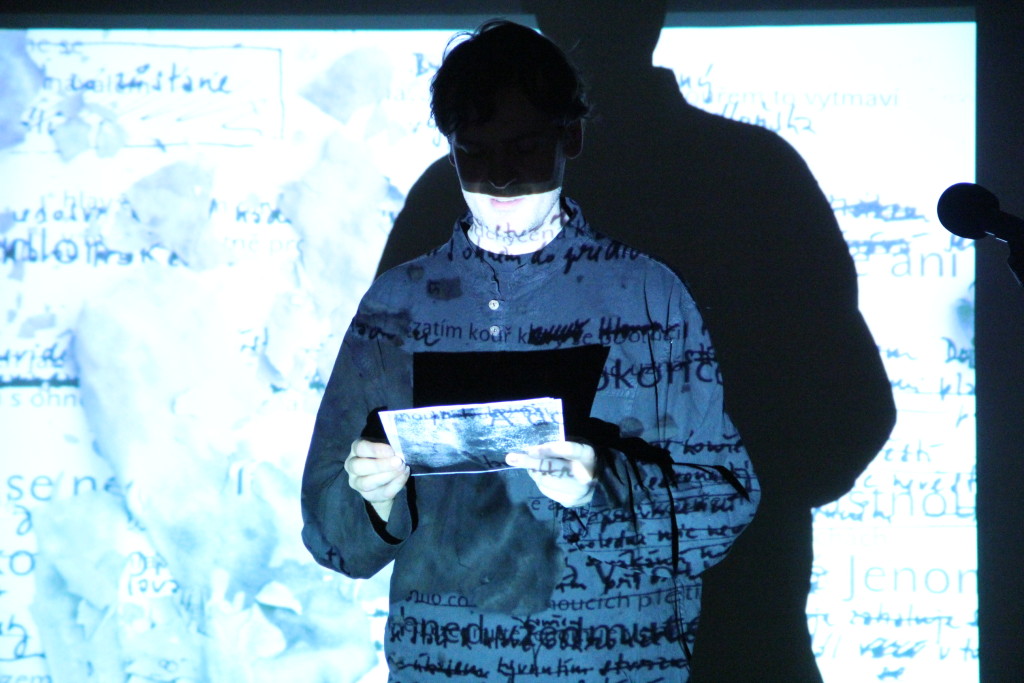 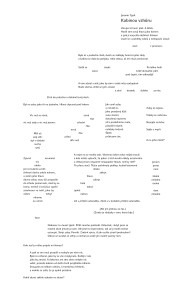 When I began experimenting, I had little knowledge of Stephan Mallarmé and his dreams of the ideal Book to be entered from various sides and to be read in different directions at any reader’s discretion. These connections I discovered only in retrospect.

Here you can see my Czech text called Cable-car Upwards (Kabinou vzhůru, 2004), which is composed of various fragments of one basic action. The reader has the freedom to choose the direction in which to read the text and how to connect the fragments. I’ve found out that a good way to encourage such reading is to exhibit the text as a painting on the wall, which I’ve done at various occasions. Sometimes I also make use of the natural labyrinth of my manuscripts, thickly layered with scratches and scribbles. I’m wondering what will happen if other factors come into play, which complicate or disturb the manuscript.

This photograph shows one of my frozen texts, “texts in ice” (2007). This can also mean that these are manuscripts which are, for one reason or another, still worked on further. 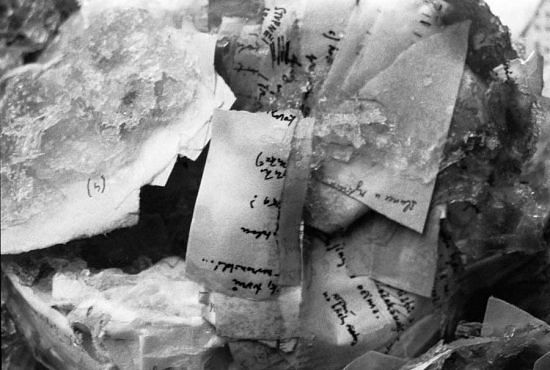 In the photo-cycle Smokescreen (Clona, 2012), I departed from a text of mine, which is semantically and graphically based on the notion of thick smoke. Another dimension was created by scorched text, text which to various degrees has been turned into smoke and ash. 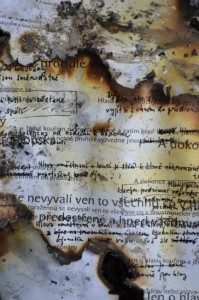 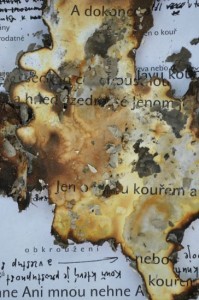 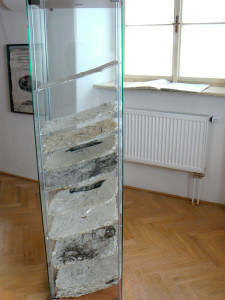 Other interesting possibilities were explored during my collaboration with graphic artist Jan Měřička. From 1999 to 2003, he reworked my texts as book objects with markedly structured paper, permeated by graphic printings. All of this went directly through the text, disturbing it sometimes to the point of illegibility.

One of the most important books Jan and I produced together was called Braincreasers (Hlavolomy, 2000) and concerned itself with the multiple layers of so-called “thought” as also “the activity of the brain.” On certain levels, even the most abstract philosophy is nothing more than a physiological function. Accordingly, my basic texts had various layers to be gradually uncovered. The first sentences of the individual parts of text combined to form a sort of connecting spell. You can get an idea about the book’s conception from a film animation.

So far I’ve dealt with verbal visuality, the various metamorphoses of its written or printed record, but the word’s sound properties are equally appealing to me.

Which is why I’ve found it difficult to settle for the classical author reading, which very often tends to lull people into sleep, and instead I began using pre-recorded tracks in order for my readings to be interrupted or enhanced by other voices. In some instances, a manuscript draft gave rise to sound composition, as in the case of Bark (Kůra, 2006–2012).

That the track is pre-recorded can of course be limiting at times. One possible solution is to include sampling devices, which I can operate myself on stage. But over the past couple of years I’ve been lucky enough to join forces with musical composer Michal Rataj and to collaborate with him on creating a wholly new improvised form where word borders on sound. Every public performance gives rise to a whole different composition, during which the voice can be recorded and altered, multiplied, animated in real time.

Earlier I talked about my interest in manuscript as labyrinth, and the point of departure for my improvisations with Michal Rataj is precisely the manuscript in the process of being created: from the first nebulous notions to first drafts, scribbles and emendations to complete text. Which is why we called our collective jamming Scribbles (Škrábanice). A brief excerpt from a CD (2014 by Polí5).

To conclude, I would like to invite you to view a brief film, where my interest in words stretching out into image and sound took its cinematic shape. The film was made in 2012, arising from the work of photographer Viktor Kopasz, author of the visual part. I’ve authored the soundtrack and the text, which appears – thanks to 3-D technology – to be an object variously attached in space. You’ll see the text in the English version with some excerpts in Hungarian, Viktor Kopasz’s native tongue.

(Link to 3D-Version: https://vimeo.com/49930268. Please, put on your 3-D glasses so that the blue colour covers your right eye. For better effect, it is advisable that you stand up and move somewhere over here.)

The inspirational surprise was for me the collaboration with the filmmaker Swoon (Marc Neys) from Belgium: he used my poems in the original language as the basis of films In the Sign (2013) and Instinctea (2014). Swoon writes about the first work on his blog. In agreement with the central theme of the poem, he filmed different empty pages of the books and with this background he caught his hands in different poses and gestures.

I’d like to reflect on the reasons why I myself have been trying for over twenty years now to extend literature into the realm of visual or acoustic arts. And I keep finding that, for all its experimentalism which has never ceased to entice me, my approach to treating the word remains closely bound with, so to speak, a very traditional conception of poetry. 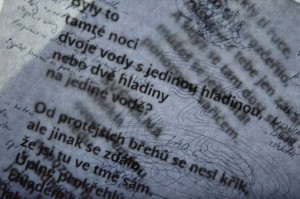 I confess I’m not entirely comfortable with accepting texts which present themselves as experimental or conceptualist literature. My issue with them is that these texts are all too easily “consumable” – their structure and intention are oftentimes noticeable at first sight, and thus they don’t really have to be read at all. The principle is instantly clear. They can be understood differently than a good poem should be: very seldom does a good poem reveal itself right away.

It is my conviction that a good text doesn’t come about by way of rational decision only, by adopting a certain method. It cannot be, as we say in Czech, “served cold,” in some literary test tube. A good text must remain unpredictable. Any predictability acts as a threat to literature and art, because it necessarily induces boredom: if we know in advance what the message is, we don’t need to plow our way through the words, let alone to keep coming back to them.

Karolina Pospiszil »Ke slovu je potřeba se doposlouchat«.
Art Audio and Text-sound of Works of Jaromír Typlt
„In the following article I present text-sound works of Jaromír Typlt on the background of one of the most interesting phenomena in contemporary Czech culture, which is audio art. Reflection on audio art and sound poetry is an introduction to writer’s works. His textes and compositions from borderland of arts, especially so-called zmutovaná autorská čtení and a cycle Audio, which raises issue of sound, hearing and their connections with literature also are analyzed in this article.“ (Language: PL.)

How The Weather Is Made – Art Brut Of Zdeněk Košek (english) 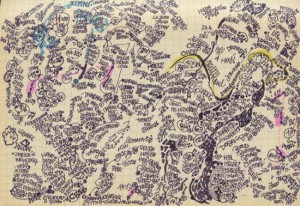 „Zdeněk Košek could have been not only an excellent apprentice augur but possibly also one of those priests who read signs from lightning. His notebooks are literally overflowing with it. What could be easier for him – considering his perceptiveness – than to interpret, based on the type of lighting, its color, direction and place of impact, which god has sent the lighting bolt and for what purpose?“